How we assist You to learn Burmese/Myanmar

You want to learn Burmese/Myanmar.

Burmese is a fascinating language but pretty much divergent from Western European languages including English. It is a tonal language in which changing the tone of a syllable profoundly affects its meaning. It has a distinct script which conveniently tells you quite a lot on how to pronounce Burmese words.

There are various ways to learn Burmese. It depends on whether you live in the country, whether you attend a course or whether you have the opportunity to communicate with native speakers. Our book and this Website are intended to assist you in learning Burmese as a foreign language.

If you are interested in an online course, let us know by using the contact form or by sending us an email.
We are planning to develop an e-learning platform that allows the creation of virtual class-rooms.
For individual lessons with a native speaker teacher, you can also directly contact "wynnthuzar Winn" on Skype. 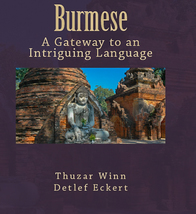 Our book 'Burmese - A Gateway to an Intriguing Language' is structured around 20 key words and expressions. It builds up vocabulary and sentences on the basis of the script with extensive step-by-step explanations, for we aim to convey a deeper understanding of the language.  Many chapters in the book also offer some glimpses of Myanmar culture and the way Myanmar people think.

The book is intended for self-study but it could also be used in the classroom, for instance as a course book, as preparatory study or as a complement to the lessons. Burmese language teachers can use it to better explain the specificities of the language to learners of Burmese as a foreign language. To help with pronunciation we have used standard phonetic symbols instead of romanization as well as providing audio and video material on this Website.

After having studied the book and completed the exercises you should be able to understand how the language works, to pronounce simple written texts correctly and to use appropriate words and phrases to conduct basic conversations on subjects which are important for Myanmar people such as family, food, festivals etc.

You can order the book on CreateSpace or on Amazon.

If you live in Belgium (Brussels) you can also contact us directly by using the contact form or sending us an email.​

What People say about the book

A good resource for both teachers and learners of Burmese/Myanmar as a foreign language. A book that approaches the language in an innovative way using common phrases as a basis to develop the learning process. A welcome supplement to orthodox language teaching and learning.
Zeyar Lynn (U Myint Aung)
Myanmar Poet and Author; Principal of Y.E.S Language Centre, Yangon, Myanmar

The first thing I noticed is the different approach of presenting the Burmese language by introducing the script from simple to complex with a lot of detailed explanations. The authors also adopt a lively friendly tone in unfolding the complexity of Burmese to the readers with different linguistic backgrounds. The exercises are helpful and appropriate for the learners of Burmese as a foreign language while each chapter offers useful notes to the teachers as well.
May Nyane
Burmese Novelist; Burmese Language Instructor, Maryland, USA

The authors take you by the hand and lead you straight to the fundamentals of the language. The strategy to prioritize the most useful nouns, verbs, and phrases from the very first lesson lets you immediately put what you have learned to use. I'm convinced it'll become a great resource for beginners trying to wrestle with the mysteries of Burmese.
Kenneth Wong
Burmese-American Author, Translator, and Blogger
UC Berkeley, California, USA

The authors promote the language and the culture of Myanmar. This is a welcome and important contribution to the development of our country.
U Thant Kyaw
Deputy Minister, Ministry of Foreign Affairs, Myanmar
Former Myanmar Ambassador in Belgium